Woke up to another scorcher of a day. Heading over to the shared washroom in the small courtyard of our hostal I realized that my face was burning. I shouldn´t have been surprised looking into the mirror and finding my face the color of a Coca Cola bottle. When I come to Peru I usually don´t use sunblock and just let myself tan into my normal brown, those times hadn´t brought me to Caral though which worked it´s magic on me.
Maycol and I spent about 3 hours waiting for a ride in the Plaza de Armas of Supe where we would then head to Casma. Sitting around in the sun without any sunblock was smart on my part, not that I cared much, when it got uncomftorable we´d head over to a little shop and buy some Inka Cola and some Ice Cream, then we´d head back out in the plaza and hang out under a tree and chat up the locals. 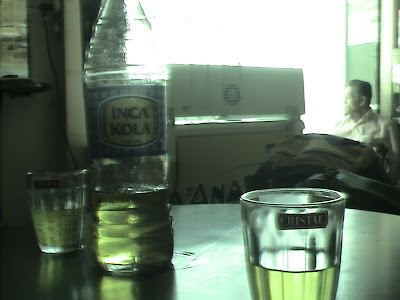 Slowly but surely our skill of flagging down cars by showing some skin worked. We headed off towards Casma that afternoon passing the lively town of Barranca where we should have stayed the night. The town has a great beach where you can camp out, call it an opportunity missed and experience gained.

We reached Casma in the late afternoon and it remains the hottest town we´ve visited. Even though it´s dry out I´m sure it was a good 95 degrees farenheit. We stayed at my cousin Olgas house that night which is under constrution and had the whole place to ourselves even though there was no electricity. 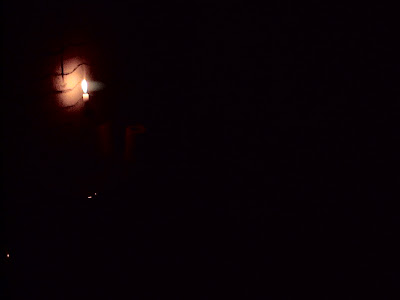 Bathroom by candlelight, how romantic…

The next day we headed out for the ruins of Sechin. New discoveries in the last few months have put Sechin on the map for Archeologists. A new temple at the complex has been carbon dated to be 5,500 years old, thats older then the pyramids of Giza, and although Sechin is not a complex city like Caral it is no less significant. On the way to the ruins which is only about 10 minutes from Casma we passed some huge sand dunes which made me very excited about the thought of the massive dunes we will be sandboarding next week in Huacachina.

Sechin is another one of the many archeological sites throughout Peru that gets very little attention due to the cyclopean Machu Picchu where all the tourists flock. We once again had these ruins to ourselves and had a look around. Unfortunatley the temple that had made the news a couple weeks ago remains closed to the public and is actually being reburied in order to preserve it. They do this to avoid the fate of another work of ancient Peruvian art that was found near Sechin, the heads below are replicas the originals were destroyed by earthquakes and rain. 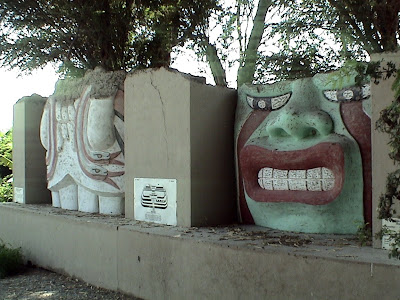 The main complex itself is huge and its outer walls are covered in art dating back to 3,000 BC.

My time is almost up here at a small internet cafe in Chiclayo, I catch my bus back to Lima in about 2 hours, it´s a 14 hour bus ride in, so I´m going to get some Arroz Chaufa and head out. I leave you with this video of the climb up yet another mountain to get a better view of Casma. I´ll try to finish up days 3 and 4 before Friday, oh and Happy belated St. Patricks Day!!