Trujillo is the third most populous city in Peru, of course at the time my cousin and I were not aware of this. The bus ride into the city seemed to take forever as we approached the bus depot near the heart of the provincial capital. Fortunately there is never a shortage of entertainment for Peruvians and we were relieved of the long bus ride by entertainers who would hop on board for a small tip. One of the more memorable entertainers was a comedian who would go around the bus ripping on everyone, he seemed to focus on love and relationships, his delivery was spot on! 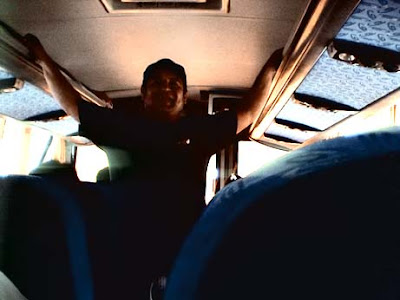 After hopping off the bus we walked a couple of blocks with our backpacks at which at this point felt as if they were getting heavier as the trip went on. Dripping with sweat we we entered the Plaza de Armas. We were quickly impressed by the fountain sculpture at the center of the square which represents work, art and liberty. 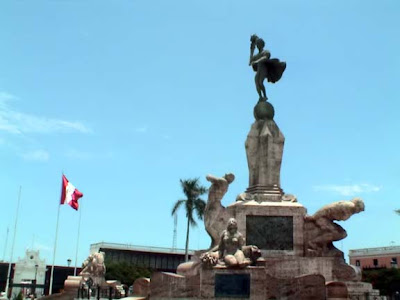 Trujillos colonial charm can be seen throughout the city, and its brightly colored buildings create eye candy for the passing visitor. We walked four blocks down Avenida Pizzaro to Plazuela el Recreo where we found a hostel with the same name on the eastern corner of the plaza. I immediately set to work on bargaining prices and introducing Karikuy to the hostel owner. After exchanging contact information we were led up to our room which was a double with a balcony overlooking the plazuela. 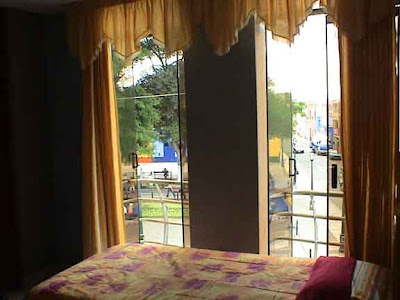 The room included a TV and private bathroom with hot showers which I quickly took advantage of. I gotta say no matter how long I stay in Peru for I still can’t get used to cold showers, as strange as it is though I do feel great and more refreshed after one. I guess its the shock of cold water hitting your skin that I can’t get used too, even in scorching hot weather…oh well. We freshened up a bit, I added some more sun tan lotion to my cherry red nose and then headed out for an evening snack as well as some internet time.

When we returned to our hostel we were surprised to see that a crowd had gathered outside in the plazuela and a stage erected. We asked around and found out that there would be a poetry reading and concert in honor of the birthday of Cesar Vallejo, one of the great poets to come out of Peru and also considered one of the great poetic innovators of the 20th century. We watched the concert from our balconies while we prepared to head out to the night clubs and I took the opportunity to shoot the following:

Luna Rota was the name of the club we headed to that night, perhaps we arrived a little early but we got a sense that the people of Trujillo were a bit conservative in that a really good live salsa band was playing and no one was dancing. We arrived at about 10:30pm and the party didn’t really start until midnight, and this is on a Friday night! no sir not in Lima, no way. Regardless we danced and toasted the night to our time in Trujillo, the rest of the nights details remain in this city, a city known for it’s revolutionary spirit.

In the morning we woke up a bit groggy and hungover, I took a much cooler shower then I’m normally used to in order to get the blood flowing. Stopping at a little diner we grabbed a quick breakfast that to most would look like dinner, Lomo Saltado on a bun. 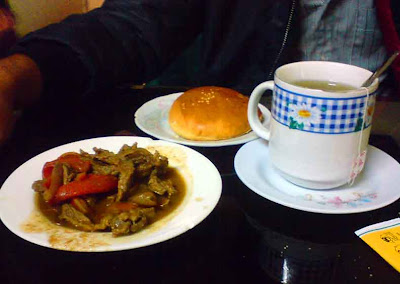 We then headed out to the ruins of Chan Chan. The ruins are about a 15 minute taxi ride from Trujillo’s center. We were dropped off at an entrance where there were other taxis waiting to drive you even closer to the ruins. This being our first time at the site we decided to just walk, it took us about 25 minutes to get to the ruins and it was a nice walk since cities on the coast enjoy very comfortable temperatures in the morning. 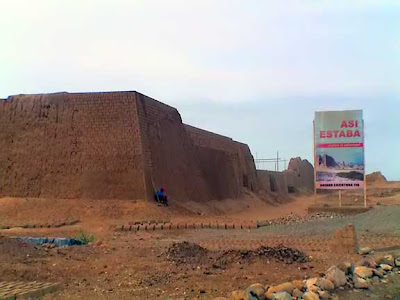 My cousin also had a radio built into his cellphone allowing us to hear the latest news and music. It was here that I found out about the scandal regarding NY Governor Spitzer, the early morning show was ripping on his so bad I almost wet myself but hey thats politics..

Getting back to Chan Chan, the city is the largest adobe city in the world. The layout of the complex is huge and only a small portion of it is accessible to tourists. There were several scaffolds and signs of reconstructions being made to the complex, it seems that the changing climate and the effects of La Niña are really taking a toll on this ancient city. Here are a bunch of photos of the site: 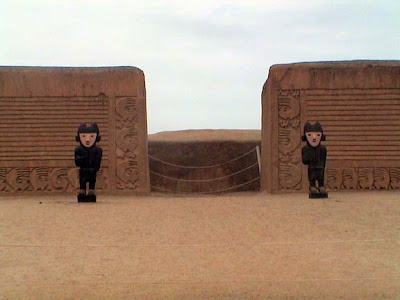 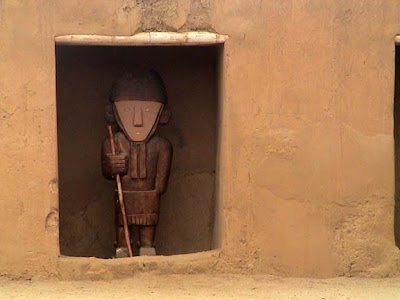 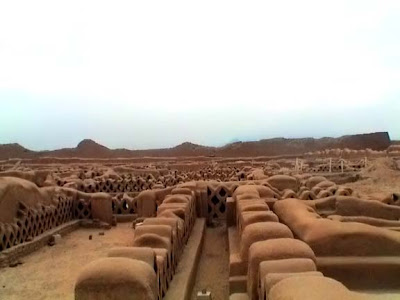 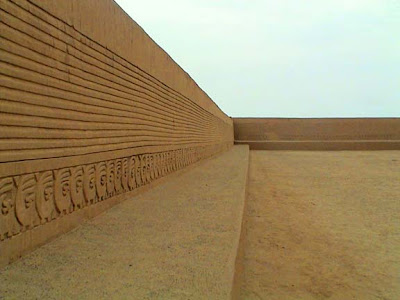 So is Chan Chan worth visting? Yes of course but having a guide with you is key. There are many facts about this complex that would elude the traveler who decides to walk through the site by himself. For example there are rooms with pillars that project your voice through acoustic wedges, there are also halls with optical illusions to make them seem bigger on the other end.

We spent the whole morning at Chan Chan returning to Trujillo in the early afternoon. The next city on our trek was Cajamarca, about a six hour bus ride through the Andes. Unfortunately the weather was not on our side as we climbed into the Andes and as the sun started to dim so did our hopes of a panoramic drive into the legendary Peruvian city. 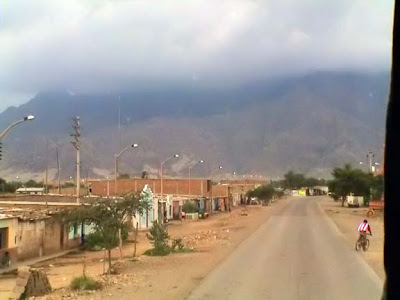 We arrived in Cajamarca at about nine at night, once again we set off to the main plaza commonly referred to as the Plaza de Armas in South American cities. We had made friends with a lovely German backpacker who was led us to a hotel off the Plaza de Armas, once there I introduced myself and Karikuy to the owner so we could exchange information. He quickly escorted us to a room with a balcony overlooking the Plaza. This room had three beds and was rather large, it might just take the prize as the best room we’ve stayed in during our whole trip. 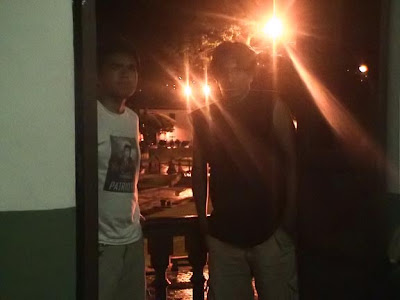 We got dressed and cleaned up a bit, it being a Saturday night it was obvious that we would check out the local nightlife, however at this point we were starving. Theres something about high altitude towns that make me very hungry, perhaps it’s all the calories I’m burning, after all your heart pumps faster as your body tries to consume more oxygen from the thin atmosphere. We really gorged ourselves, after having some Chaufa for dinner we headed to a restaurant for some Pisco Sours and an omelet. 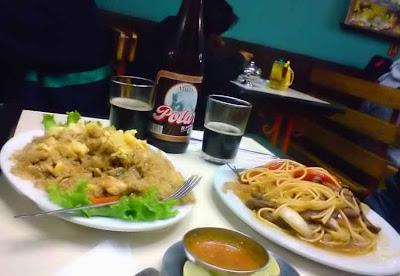 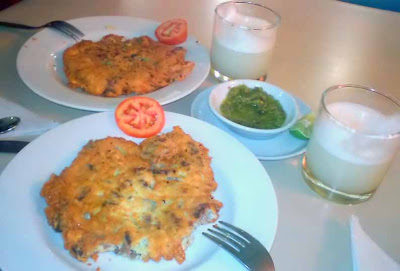 You might be thinking how it could be possible to even think about dancing after a meal like that, well they don’t call Peru the gastronomical capital of the world for nothing. It seems as if each meal complements the next and with the food being so delicious it’s hard to really feel full. And so rejuvenated and ready to explore the city we headed out for another intense night of dancing, drinking and meeting new people. The next day would be a little disappointing but in the end would work out to be a lot of fun.