The loud bells of the cathedral next to our hotel made for an excellent alarm clock as we woke up to a cloudy morning in Cajamarca. From our balcony we watched as the townspeople gathered around their cathedral for the Palm Sunday procession. 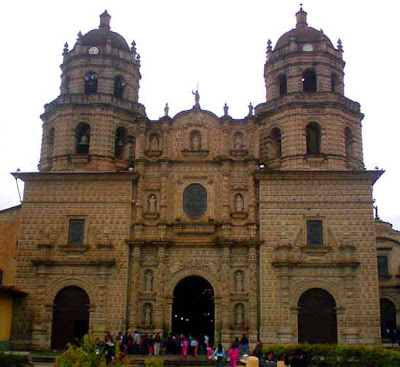 Our plans for the day was to catch an early bus for the town of Chachapoyas where we could head out the following day to the ruins of Kuelap. First we wanted to visit the famous ransom room of Atahualpa. The ransom room is located less then a block from the Plaza de Armas, if your looking for it ask a local for “El Cuarto del Rescate”. Be aware that you have to buy tickets to get in and for some reason the ticket counter is located about two blocks around the corner. This ticket includes entrance to an art museum (Museo de Etnografia) and a convent (El Complejo de Belen), both within walking distance. 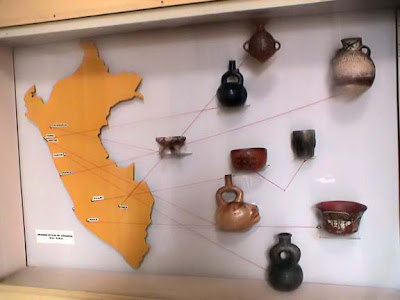 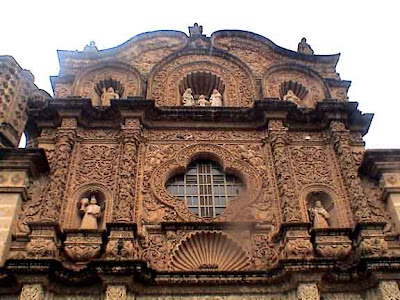 El Complejo de Belen, built entirely from volcanic ash
We finally made our way to the Ransom room. In 1532 the Spanish arrived from Tumbes on the coast. With 160 men Pizarro rode into Cajamarca to meet the Inca Emperor who he had been hearing about since meeting fishermen from Tumbes a year earlier. Atahualpa fresh off his military victory against his brother Huascar was on his way to Cusco and had stopped at Cajamarca with about 60,000 of his men. In one of the most incredible turn of events in history Pizarro was able to ambush and capture the Incan Emperor. Atahualpa had decided to kill Pizarro and his men for their actions on their way to Cajamarca, actions which included poor treatment of the peasants and even murder. However, Atahualpa underestimated the Spanish and paid the ultimate price, the ransom room was where he was held captive until his execution in 1533. 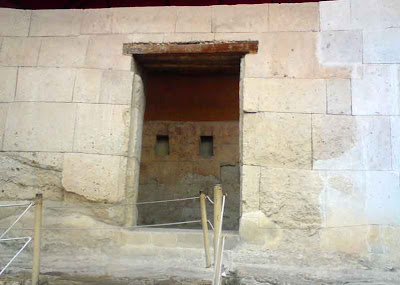 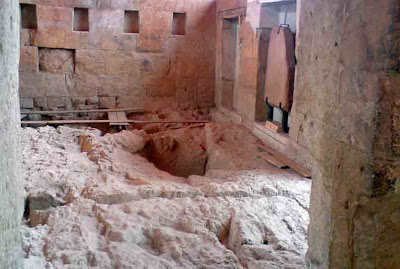 The ransom room is the only Inca building left standing in Cajamarca. It is a very somber place, with large drawings depicting Atahualpa and the fall of the Inca Empire. 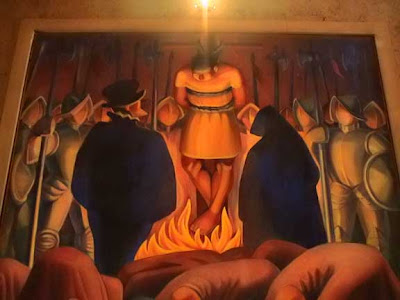 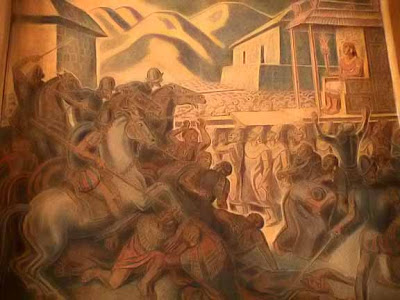 From the Ransom room we headed to the plaza to find out bus schedules for Chachapoyas. As we spoke to several agencies we soon found out that we would have to take a six hour bus ride to Chiclayo and then another twelve hour bus ride to Chachapoyas. That was if the weather cooperated which it hardly seemed to want to do, so it would be about a 4 day trip there and back, time we just didn’t have. We decided to take a tour around Cajamarca and leave for Chiclayo the next morning, there we would check out the Lord of Sipan and take a overnight bus back to Lima in time for my birthday bash.
This was by far the biggest disappointment of the trip, I know I’ll go to Kuelap eventually with Karikuy but it would have been nice to inspect the site and also check out Chachapoyas and the hotels there.

Another learning experience behind us we walked up to the hill called Santa Apolina. At the top is said to be The Throne of the Inca, a large rock that resembles a throne and was used by Atahualpa to review his troops. The view from the top reveals Cajamarca in stunning fashion, on all sides the city is surrounded by the Andes mountains. 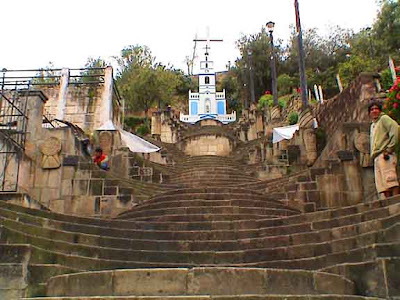 A breathtaking journey to the top of Cerro Santa Apolina
After the climb we returned to the plaza for a small lunch before we left for our tour of the area. I was in the mood for some cold cuts and a cold glass of maracuya. 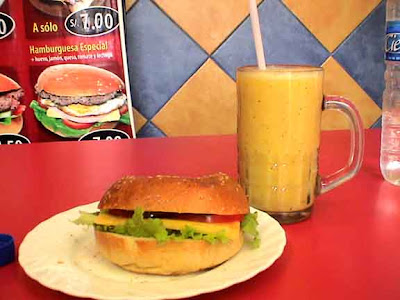 An hour later we were heading to the plantation known as Colpa. Decades ago the Cows of Colpa were famous for the amount of milk they produced. Inside Peru the sweet known as Manjar Blanco is very popular and Colpa makes the best. 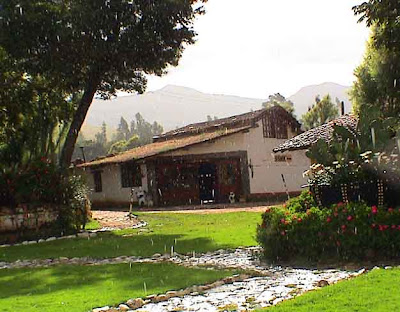 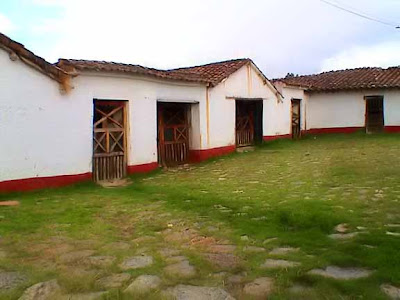 Colpa is also famous for its cattle that recognize when they are being called to eat by a wrangler. On top of that they walk into a pen that has several stalls with all the cows names on top, there they obediently seek out their names and begin to feed. We were treated to a demonstration, here is a short clip, you can hear the wrangler calling out names in the background:
From Colpa we headed to some waterfalls located across the valley in Llacanora. It was an easy hike although our group found it hard to keep up with my cousin and I as we explored the area like two five year olds let loose in a zoo. It must have been our love of exploration and the fact that we were going to miss out on Kuelap that we would daringly climb boulders that had fallen into the streams as the river rushed beneath our feet. We could feel the waterfall in the distance as its roar became thunderous with our arrival. We reached the first waterfall 20 minutes into the hike, at 10 meters high we took a couple shots of the falls just as our group started to arrive.
Ten minutes down from the first waterfall we discovered the second, this one being 20 meters high, we were able to get real close and take some footage.
We drove back to Cajamarca as the sun started to set over the cloud hugged Andes. That night we would have a medium sized dinner and hang out in the Plaza de Armas, we were tired and drinking was not on our minds. Tomorrow we would have an early six hour bus ride to Chiclayo. I already missed the waterfalls of Llanacora, I love to hike and explore, I was not looking forward to sitting on a bus for six hours. I would soon have to realize that the bus rides would only get longer and that due to the little time I had left in Peru the pace of our travels would accelerate, as well as our pulses.