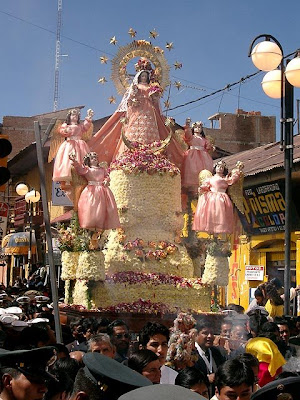 Every year beginning on the first of February, Puno; the Folkloric Capital of Peru, explodes in celebrations to the Virgen de la Candelaria. The Virgin is the patron saint of Puno, and la Candelaria translates to the presentation of her son Jesus. The festival lasts for many days and can be seen as a prelude to Carnival which is celebrated throughout Peru in February.

This year this festival begins on Sunday, February 1st, lasting approximately 18 days the festival will exhibit more then 200 groups of musicians and dancers from the many areas of Peru. An expected 40,000 tourists will be on hand to experience the parades, processions, heavy drinking and fireworks.

The history of the festival is said to be linked to the Pre–Hispanic agricultural cycles of sowing and harvesting. Both Aymara and Quechua cultures celebrate the festival which also attract Christians and Pagans alike. The worship of the Virgin is also attributed to mining in the region. The dance of the demons called Diabladas, which is the main dance of the festival, is said to have been created by a group of miners trapped in a mine who in their fear and desperation gave their souls to the Virgen de la Candelaria.

The festival has two main phases. The first is described as el Dia Principal, the principal day, in which a procession carries the statue of the Virgen around the city, while dancers in lavish costumes dance around the main square to join the parade. The dancers, by group, pause in front of the cathedral to be blessed with holy water, after which they are cooled with water thrown from nearby houses.

The second phase occurs on the Sunday after February second, called the Octava. On this day, El Sugundo Gran Dia, translated into the Second Great Day, costumed groups from the surrounding areas of Puno dance day and night in religious fervor and competitive spirit.

As the festival whanes it is not uncommon to see water fights erupt throughout the city as Carnival in Peru begins. So if your in the area please make sure to check out Puno and all the colorful festivities that surround La Virgen de la Candelaria Festival. Puno is an 8 hour bus ride south from Cusco.

What the…? must be Punos version of the Yeti.

Paracas National Reserve: Where the Desert Meets the Beach

Peruvians Participate in a Guinea Pig Rubbing Ritual for Healing