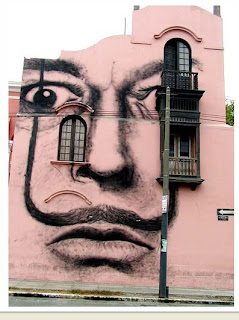 As an extrajanero ‘foreign stranger’ in a far flung place, I often find it’s the little things which are most interesting to me. These are things that often bring us together in ways that we rarely think about and maybe even more rarely speak about i.e. a gesture, a manurism or common ground.

For me, Graffiti is almost (if not) one of these forms of common ground between cultures. As the probability is good that whenever you go to a new place from the south pole to the heart of the amazon jungle someone has probably tagged this or that with some kind of statement or expression.

One good example of this being the nasca lines some 3 hours from lima. These lines are well over 2000 years old and could be seen as one of the earlier forms of graffiti. In england, too we have something similar but maybe it turned out a bit wrong as all we ended up with a chalk drawing of a 50ft guy with what can only be described as one of the largest drawings of male equipment out there…. I’m not so sure what that sais about our society and values?!

It’s because of these ‘little things’ that I’ve felt inspired to set out to document limas graffiti scene. As a way of both exploring the limanese society and exploring some streets in greater detail, road by road and block by block.

By the end of the project I’m hoping that there will be an extensive perupedia catalog of walls, works, graffiti artists and collectives. With any luck it should also serve not only as a guide on how to get from graffiti A to graffiti Z (whilst covering any major landmarks on the way) but to open peoples eyes to areas of the city that would normally go unexplored.

Due to my limited time frame I’m going to be concentrating on specific areas of the city as Lima is a big place after all:

In its current form the project is In the early stages of research. Most of the research done so far has been via the internet internet – flickr , google etc.

Our collective excursions (see right) in the past week have also unearthed some interesting pieces, political statements and graffiti areas. I’ve been eagilly trying to note down pieces, locations and descriptions in order to create a map of limas graffiti. However, I can tell you that trying to take notes whilst travelling at 60mph in the back of uncle stevies taxi, whilst he’s dodging lima traffic can make for a challanging journalistic experience to say the least.

One example that I’d encourage anyone to check out is a black and white baby/childs face on arequipa [left hand side, away from central around cuadra 15-25], one of the more playful themes here. Arrequipa is one of the main streets here in lima that pretty much divides the two cities in lima of rich and poor – one of the streets that divide lima between rich in the center and poor on the outskirts. On the same street there have also been stencils appearing much further down on the street in support of the current indigenous struggles in the north – a real hub of artistic and cultural exchange.

Just driving to pachacama there were also plenty of political slogans have been rampent in some parts of Lima, such as “Alianza para el progresso” (Aliance for the progression) , “acciono y cambio!” (accion and change!). One of the most obvious pieces being ‘ALAN’ in huge letters on cerro san cristobal (the equivilent of sugar mountain here, in lima) that I spotted during a vist to one of the hospitals in barrio alto, which is one of the more ‘scary-fun’ areas of lima. The graffiti piece was presumeably in support of the current president Alan Garcia.

In the weeks past excursions I’ve also been noticing a lot of ‘semi-graffiti’ such as the “No a paro, No to violencia!” banners which have been appearing in mierflores in responce to the current strikes and political turmoil here (another backlash to the governments handling of the indigenous population in the north). This is something which appears to be typical mierflores attitude and although it couldn’t be called graffiti in the traditional sense (on a wall for e.g.) it certainly has been (in my mind) an interesting form of expression by the populace here, in lima.

Peter is a brit from Essex, England and was working as a computer games tester but now is an aspiring journalist or something or other.